I have big plans and high hopes for this year. So, I think I will dust off the blog! (not sure if that is a good or a bad thing, it is just a thing)

I went back to a race that I have’t raced at in 7 years! It is a season opener of a race out in the Palm Springs/Palm Desert/La Quinta area. It is a bit of a shag of a drive for us but it is usually a pretty fun race.  I have put in a lot of training since September and I was excited to see how that would translate to a race.

We got to the race at 5:30 AM on race day because we couldn’t get out early enough the day before to check in.  Once I had everything labeled and set up was able to take a brief practice swim. Water was chilly but not terrible. It was a little windy, but we had no idea what was coming out way.

When our swim wave went off the winds kicked up hard! The result was the buoys were all blown off course. Being the good triathletes that we were, we all swam to them anyway. The result, 1908 yards for my Olympic Tri swim. (an Olympic swim is usually only 1640 yards, 1500 meters). Lucky for me I am pretty comfortable in open water so I just got on with the swim. I definitely saw others that were struggling.

I was worried what the windy swim meant for the bike. It was really gusty as we made our way out of park. Luckily, the wind was fairly consistent in direction so of the 4 side to the ride, only one of them had wind that was a bit harder to ride in. I was able to maintain aero for almost the whole ride (even if my husbands video don’t support this).

My husband was out there doing his best to let me know where I stood placement wise during the race. It was relatively easy to do through the bike but once I got on the run it got even harder. When I came in from the bike, Stuart had me in 3 place overall. I went into this race feeling that I had a pretty good chance of making the podium. I was really only thinking about my age group. Hearing that I was so close to the top 3 was pretty exciting for me.

Once on the run I just tried to keep it consistent but NOT take my foot off the gas. I almost took a wrong turn early in the run, but I didn’t get too far before I realized that I was going the wrong way. The run was two loops. I passed one woman early so that had me thinking I must be top 3 at least. Towards the end of the second loop I was passed by a woman but I knew she started 6 min ahead of me because of her age so I let her go. There was no way she could get 6 minutes on me by the finish, we were too close.

Lucky for me, when you finish early you have a chance to get a free massage!

I am super proud of this race for a few reasons.

Here are all my splits for the day. 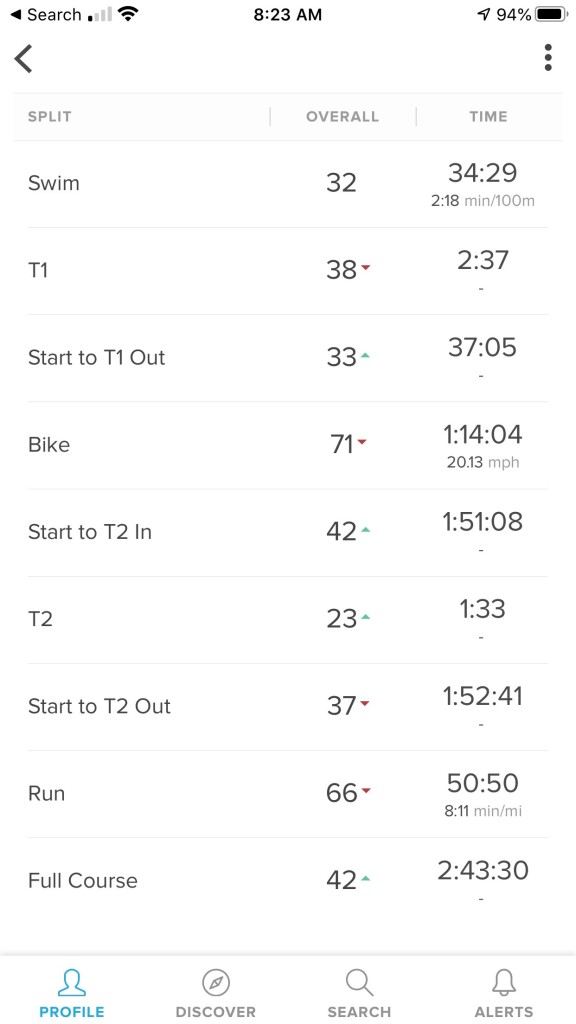 You can find my Garmin data here.

Next up, Ironman Santa Rosa training!

Thank you Stuart for all the pictures!