I posted last week about how I think I am going wrong with my vegan diet when it comes to losing weight.  Essentially I hadn’t been eating enough fruits and vegetables.  When I started the #vegan 720 I weighed 140 lbs (about 6 lbs more than when I did Ironman St. George).  I would love to maintain 130 lbs or less but that is a lot of work for me ( I am 5’5″ for reference).  Anyway, last week I was up to 141 despite  sticking to a strict vegan diet.  As a result I drastically increased my fruit and veggie intake and decreased my cereal consumption over the last week.  Below is the result…

Now lets see if it sticks… And if I can shed another 5!

*yes I have Gary the Snail tattooed on my foot

There are so many horrible stories out there in the news; it often makes me cringe.  But here is something to make you feel good

The coolest part is the kid in the video just ran a 3:01 marathon and qualified for Boston!

When I started the #vegan720 challenge I had essentially three goals or at least results I was hoping to attain.  I wanted to eat more whole foods/less processed food; get the natural energy boost I hear about; and loose some weight.  I have felt the natural energy boost for sure.  I no longer want to curl up under my desk after lunch and tale a nap.  I sleep well and wake up feeling great.  I am eating “better” and I have become much more food label conscious.  It takes me twice the time to grocery shop and I am constantly reading labels of everything I eat.  But I haven’t lost weight; I have actually gained a pound.  And I think the picture above explains why.  Fruits and veggies are not always the most abundant food source in my day.  I have become very dependent on grains and cereals for quick snacks and even sometimes meals (yes, cereal for diner).  I think this is why I am not realizing the weight loss I was hoping for.

So I am still sticking with the vegan eating thing but I am trying hard to eat WAY more fruits and veggies at every meal.  I am also trying to have fruit and not cereal for breakfast anymore.  A very hard habit to break!  Below is what I packed for lunch today.  A big old crunchy salad with a creamy avocado.  Not sure if I can make it until lunch time!!!

Thanks Healthy Bitch Daily for the Pyramid

I made it… 30 days with no animal products.  I think except for one bun on a veggie burger that I am sure had egg in it, I have done it; NO animal products ingested!  The biggest changes I had to make to my daily routine were to cut milk from my cereal (which I had mostly done already), no more cheese as a snack when I got home from work, and no meat at lunch or dinner.  The hardest of those was no cheese.  There seems to be cheese in and on everything and it tastes so darn good.  I did experiment with a couple vegan cheese alternatives and they started to grow on me over time.

What did I get out of it?  The most noticeable difference was an increase in energy level.  Immediately I was not having that afternoon crash around 2:30/3:00 and I was drinking much less coffee.  I did crash one day and that day I had a huge bean and rice burrito so I think the SUPER carb heavy meal just knocked me out! This also forced me to try new foods.  Except for vegan cheese which is a little “different” everything I had was great!  There were also a few other changes in my body (some better than others) that came with the vegan diet.  I am not going to spell them out in an attempt to not be too graphic or gross. I will caution if you make the switch, stay close to the bathroom for the first couple days.  There can be a lot of fiber in vegan cuisine!

I did NOT get the weight loss I was hoping for so I am going to have to get even more serious about my diet to lose these pesky 8 pounds. I found that if there wasn’t anything readily available to eat in the house I would gladly have a bowl of cereal with coconut milk.  That didn’t do me any favors.

Some lessons learned thru this were one, always be prepared. Make sure you have food available so you aren’t always eating cereal.  This also involved making a casserole at the beginning of the week so I would have a couple of lunch and dinners already made.  Two, restaurants will help you out if you are nice to them when explaining your dietary restrictions.  I almost always looked at menus ahead of time before going to a restaurant to get an idea of what I could eat with the least amount of modification.  Three, don’t restrict everyone else’s diet because you want to eat differently.  But you can incorporate some of the healthier options into their meals without them even knowing it.

Where to now… I think I am going to stick with the vegan thing indefinitely for now.  It really isn’t hard and it is providing me a nice framework for trying to eat more “whole foods”; something I think we all should do.  I could see down the line maybe adding in eggs every once in awhile and possibly some cheese when it can’t be easily avoided.  But for now I am going to keep it up.  I would like to see how training for the Boston Marathon would be on a vegan diet!

I have been spending more time at health food grocery stores during my #vegan720 challenge so this video made me giggle.

When I first started my blog I had written a post about what time I get up to work out.  Back then I would get up most weekday mornings between 4:30 and 5 so I could run and be home by 6:00 AM.  Back then my life was very different.  After reading a post today by Warrior Betsy, I thought I would write briefly about what has changed.  I have been separated for over a year and am in the process of getting a divorce.  I will never use my blog to write much about this topic because some things don’t need to be discussed in this forum.  But Betsy’s post made me feel a need to bring it up. I just wanted to say that it is OK to be going thru a divorce and it is one of the things that MANY people go.  I think honestly I have been a little ashamed of the fact that my marriage didn’t work out and have really only talked about it out of the public arena.

The reason I discuss this under the context of my love of morning running is that as a result of the separation I can no longer go on morning runs.  When I have the boys there is no one to watch them while I run; and when they are with their father, I have to show up early to get them ready for school so there is no time to run.  This morning because of some silly sewer line issues at my place I had to spend the previous night at my mothers and therefore had someone to watch the boys while I ran before sun-up.  It was AWESOME to get a run in early, with my head torch, under the stars.  There will be a day when I am with someone and I will get my morning runs back.  I look forward to that day!  But for now I will try to steal every morning run I can! 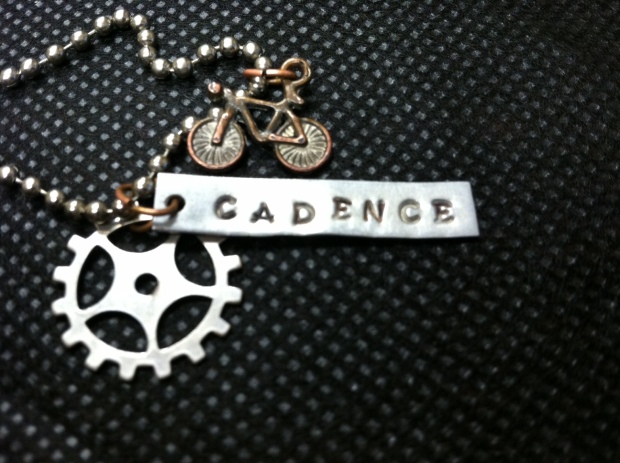 If you are unfamiliar with this term it means how fast you are peddling on your bike.  Last year I was doing a lot of training on a computrainer and the focus there was often on your cadence.  We always pedaled at 90RPMs or faster (unless we were doing a special set). Since I stopped going to computrainer sessions (too pricey and I just don’t have the time) I have struggled to really pay attention to my cadence and as a result, it has been getting slower and slower.  I have signed up for my next ironman distance triathlon (Challenge Penticton, August 2013) and I NEED to have a better bike split than St. George. I truly believe that in order to improve my overall biking I need to start with my cadence.

So my plan (everybody needs a plan) is to hit my bike trainer twice a week and simply PEDAL FASTER!!! I will use The Sufferfest Training videos and keep the resistance low; but really (I mean really really) try to match the cadence of the workouts (which usually range from 90-110 RPMs).  I am also hoping this helps speed up my running as well.  I was running much faster last year when I was attending computrainer classes.  It is time to get my butt in gear!